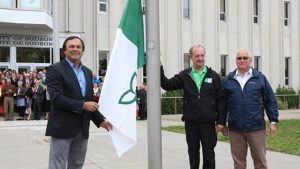 The Flag Shop has learned that  Michel Dupuis, co-creator of the Franco-Ontarian Flag has passed away.

The Franco-Ontarian flag was created in Sudbury, Ontario in 1975, by Michel Dupuis, a first-year political science student, and Gaetan Gervais, a historian – both from Laurentian University. Dupuis was 19 years of age at the time.

Created as a symbol of the Franco-Ontarian identity, this flag and was the second to be embraced by Fancophones outside of Quebec, following the Acadian flag, which was adopted in 1884.

In 2010, the Ontario government declared September 25 as Franco-Ontarian Day – a day to “officially recognize the contribution of Ontario’s Francophone community to the cultural, historical, social, economic and political life of the province.” This day was chosen because it was on this date in 1975 that the Franco-Ontarian flag was unfurled for the first time.

All of us at The Flag Shop Vancouver Head

Office extend our deepest sympathies to the family and friends of Michel Dupuis.